Getting Back to Blogging...


It seems that cycles of writing regular blog posts interspersed with weeks/months of being incommunicado affect many bloggers, and unfortunately I am no exception. Apologies. It is not due to being inactive on the art front... in fact the pause often happens initially because of a very active phase and not having the time and energy. Then it becomes harder to get going again. So a very quick update and then I will move on and re-commit to this blog as I do love the way it can act as an online diary and record of a life in art, while at the same time inspiring others, hopefully.

If you pop onto my page for Art Events & Teaching you will notice that I am running regular classes and workshops throughout this year at Norfolk Creative Arts, an exciting new venue in Grimston, West Norfolk. There are a wide variety of tutors, subjects and media so if you wish to investigate visit www.norfolkcreativearts.co.uk and there is sure to be something to tempt you!

Aside from all the planning for these classes I am also busy with personal artwork as a joint exhibition with another artist is looming on the horizon in May. More details will follow in the next few weeks but we are both creating mostly new work for it and the beautiful village hall in Thornham is quite spacious, so the pressure is beginning to mount.

Some images of work that may be included in the upcoming exhibition...


So a little sneak peak at some of the contenders to be included, there are works still in progress (not shown) and I am excited about work yet to be created! Will keep you posted on new developments but if you are in Norfolk over the weekend of 14th and 15th May, 2016 we would love to see you at our exhibition Into the Woods & Beyond to be held in Thornham Village Hall, PE36 6LX.

Sketchbook work continues as well, and possibly may be included for perusal... 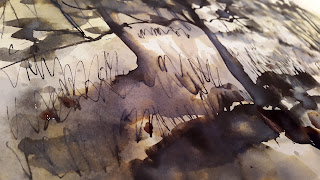 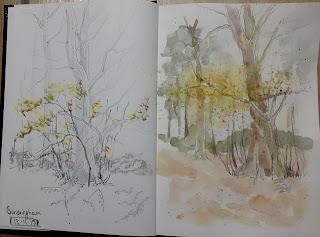 Finally, a recent exhibition visited by myself and family was Painting the Modern Garden: Monet to Matisse at the Royal Academy in London. There was (and is) a close connection between many artists and their gardens and it's natural that they wished to explore ways of depicting the colours, shapes and features, often working in them as outdoor studios. Monet is the key artist in this fine exhibition but there are examples by Caillebotte, Pissaro, renoir, matisse, Van Gogh, Klimt, Bonard etc. Also some artists I had not encountered before, Joaquin Sorolla being one and I plan to research more about him. It is Monet, however, who resonates the most and the work inspired by his lily pond is sublime. Despite over exposure on packaging and household items over the years, to see the paintings in real life is to fall in love with them all over again. The fusions of colour, the abstraction of motifs and the free brushwork is totally absorbing. The finale, the triptych, in the last room is breathtaking - the sheer scale - so that as a viewer you are compelled to move up close and study the fragmented textures and colours before stepping back right back to appreciate the whole again. Like a little dance forwards and backwards we go repeatedly, drinking in the artwork with the senses. I really did not want to leave that painting and having visited Monet's garden in Giverny it is as relevant today as it has ever been.

The exhibition runs until April 20th so I encourage you to go and see it if possible!


Posted by Tod Evans No comments: 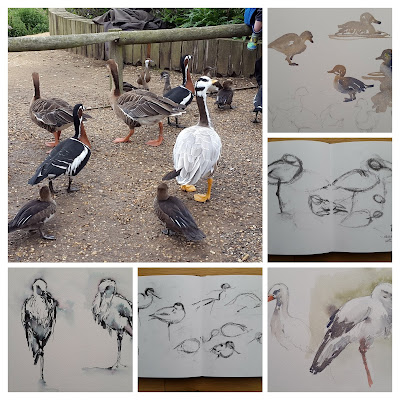 Yesterday I had the pleasure of being a student again on a workshop at Pensthorpe Natural Park tutored by Mark Boyd for the company Art Safari www.artsafari.co.uk. It was a small group so Mark was able to give each of us plenty of support and encouragement, plus he was extremely knowledgeable about the species that we studied. He suggested we first look for the oval head shape and direction of the beak, then at the body which he likened to the shape of an avocado pear. He touched on the subject of bird anatomy so we could envisage the fact that most of the leg was within the body and what we consider the knee is actually the equivalent of the ankle. It was important to observe closely the leg positions so that our drawn birds would convincingly stand up with their weight balanced. Quite tricky when many birds at rest or dozing stood on one leg!

At this point it was lunchtime and we all retired to the spacious cafeteria for hot drinks and a meal. It was only on stopping that I realised how chilly I had become while sat in one position on a little sketching stool, despite being well dressed for the overcast weather. It was enjoyable chatting and getting to know one another a bit better and to find out more about our different backgrounds and art experiences.

What a fabulous day. We absorbed lots of information and remained focused as we tried to record our observations of the shapes and movements of a variety of birds. To close the day we gathered together back in the cafeteria. Hot drinks all round again as we discussed our experiences and then Mark quickly showed us some of his work to reinforce some of the teaching points but also to encourage us to consider different ways of working even when outdoors and working from life - collage or even monoprinting.

Maybe you will be inspired to look more closely at the birds visiting your garden, or on a local village pond? Get the sketchbook out and give it a go. I know I will be attempting more bird drawings very soon, hopefully now with more success than in the past.

Experimenting with Colours and Techniques


A new enthusiasm and energy has taken hold recently with regards art making. There seems to have been a shift in my vision and a freer approach is emerging... I have been experimenting with new colours and foregoing detail in completed work in favour of expressive mark making. This is exciting!

I spent one afternoon playing with some new watercolour paints...

The potential of the new Daniel Smith colours is very inspiring as they granulate readily and the colours separate out into their component parts.


I have also been studying a new book by Debora Stewart and her techniques for abstracted art echo what I have been moving towards. The untitled (as yet) work shown in the stages below is a step in the right direction with a loose beginning, and I tried to keep the drawing spontaneous rather than laboured and exact.

This drawing was very enjoyable to do and three elements helped to keep it fresh and loose. First, I stood at an easel to work which aids larger arm movements; the initial layer of large sweeping marks contained an innate liveliness and lastly I held the pastel pencils well away from the point, so relinquishing some control. Also, the limited palette works to keep the focus on the insect and small touches of ochre elsewhere lead the eye around the composition.

Today has surely been one of the hottest so far... and I spent most of the afternoon and early evening in the studio. I would normally wear an apron when working with pastels as they are one of the messier mediums but couldn't bear the thought of an additional layer and didn't bother. Using a photo I took in Holme-next-the-Sea of pink Mallow as a starting point, I worked on a painting that focused on mark making and layering to try and capture the essence. 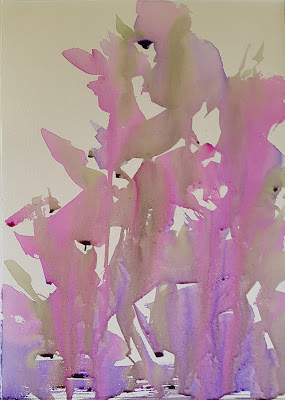 A loose wet-on-dry application of watercolour
was the starting point for this painting. The base colours were encouraged to fuse and again drips were integral as I was stood at the easel.

Although the support looks white in the photo it is a warm cream Art Spectrum Colourfix paper. The slightly gritty surface happily accepts watermedia and there is plenty of tooth for soft pastel in subsequent layers. 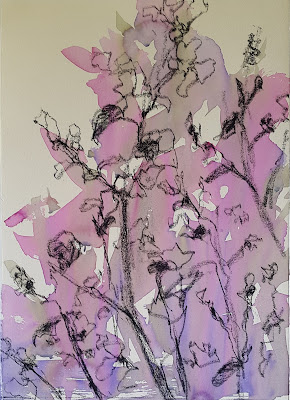 Once the initial paint was dry a very loose drawing in charcoal pencil was
established. Again holding the pencil nearer the end furthest from the point helped prevent
a tight rendition. Also pushing up, rather than pulling in a downward motion, and gently rolling the
pencil between the fingers as drawing enabled more random marks to be made. 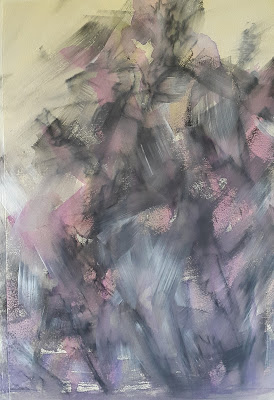 The next step seems counter productive, but I did it anyway, and 'lost' the drawing
by dragging a flat brush with diluted gesso across the surface in multi-directional strokes.
This is a technique favoured by Debora Stewart but with hindsight I realised she uses
compressed charcoal so a little more of the drawing remains intact! 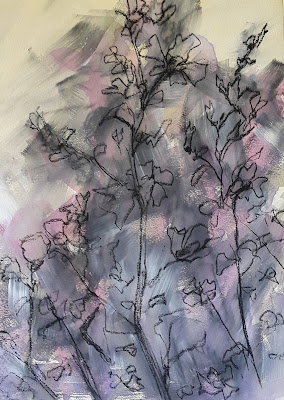 The drawing is then re-established with charcoal pencil and even if more of the first drawing
had been present this second one would have been superimposed, and slightly offset, to
enhance the feeling of layered media. My eyes are really enjoying what is beginning to happen in this work and I'm almost tempted to stop at this stage. 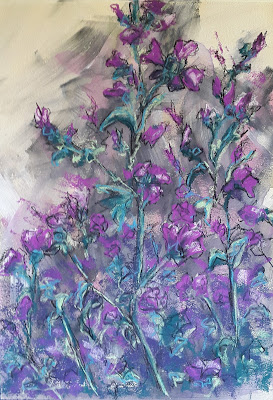 I push on however and introduce more colour using soft pastel sticks.
I limit the colours and tonal range to try and avoid confusion.
When I pause to assess how the work is going I feel a little disappointed. Close up there is plenty to engage the eye but move a short distance away and it blurs into a generalised mid tone.

Something must be done to redeem it... 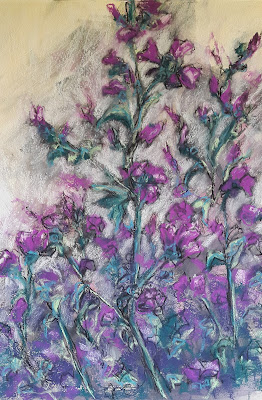 Taking yet another risk, I lightly block in the negative spaces in the top two thirds of the painting.
I use a white pastel pencil and hold it low so that the side of the point catches across the gritty surface and allows the under layer to still play a part.

I finally stop and take stock again. After a few extra dark punctuations
with the charcoal pencil I feel it is finished.

Did I make the right choice?
Too early to tell. I need a bit of time to pass to assess it as a whole again.

What do you think?

Posted by Tod Evans No comments:

Aaagghhh... busy, busy, and trip to France is imminent, but I want to quickly catch up with the news of recent activities! So, here is an edited photo essay...


I'm feeling happier now, we are all up to date. Note to self: try posting shorter entries but more often!

Please feel free to comment on anything in this blog, I would love to know your views or if you have any questions. In the meantime, France awaits so - Au Revoir!

Posted by Tod Evans No comments:

Tod Evans
I was a late-comer to art, although I have always seen 'pictures' in my head. Gradually art became increasingly important to me and I graduated as a mature student with a BA (Hons) Fine Art in 2007. I currently work as a visual artist and tutor adult classes. I am an active member of The West Norfolk Artists Association. My personal work focuses mainly on animals and natural history subjects, but due to my teaching commitments I happily tackle almost any subject. I believe in the power of drawing, and working from life, and try to use sketchbooks regularly to capture fleeting observations, to document inspiration from everyday surroundings, as well as trips to zoos, museums etc. I work across most drawing/painting media and increasingly explore the qualities of mixed media. Making working methods accessible to other people is important to me.

All images and artwork on Creating Art are coprighted by me. I may be willing to share, but please ask first. Do not download, copy or use my images without my permission. Thank you.